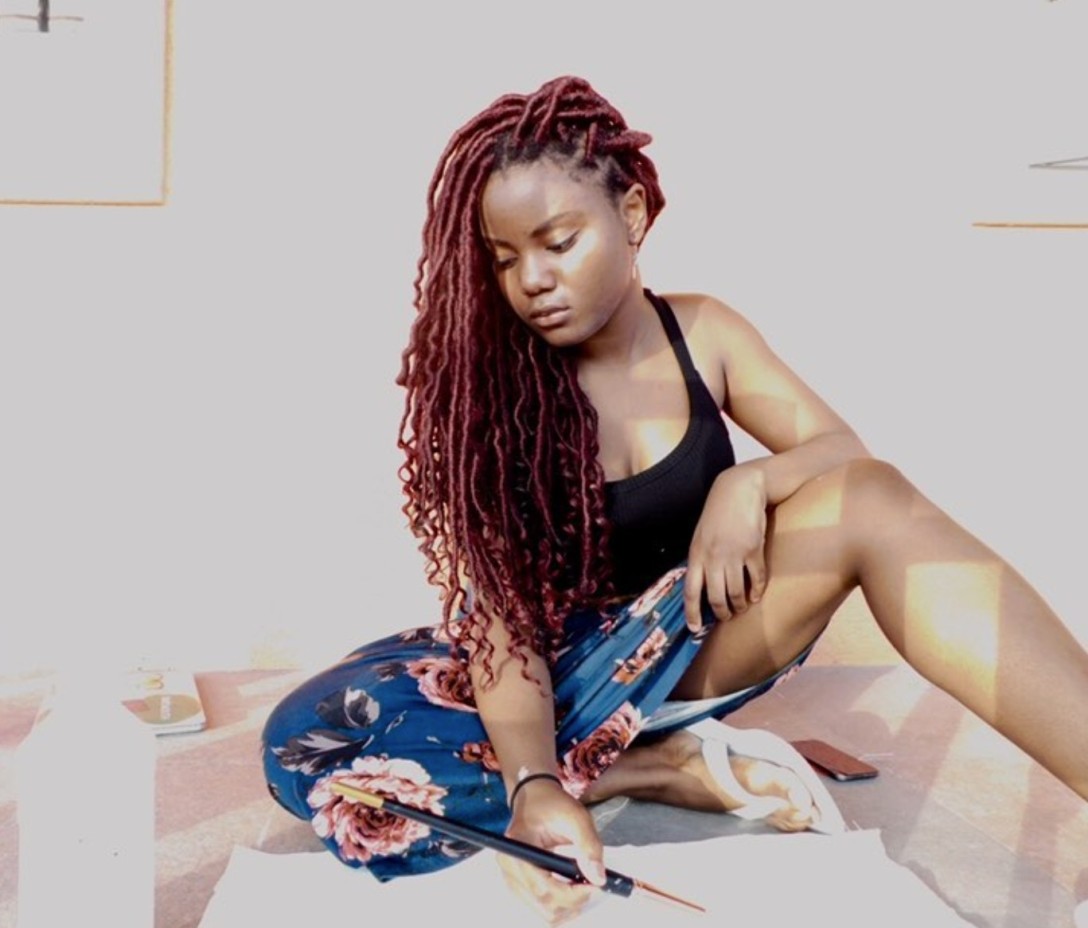 *Listen to my podcast interview with Réna King here.

Artist Réna King immigrated from Barbados to the United States when she was four years old.

During her early childhood and teen years, she always struggled with her identity as a Black woman in a country where she felt her roots were not heavily tied to.

“As a Black woman, I’ve experienced multiple instances in life where others have doubted my personal talents and abilities. This has led me to believe that maybe I can’t do this even now, but I keep pushing to get to a place where I can say to myself, ‘wow I can’t believe I doubted myself,’ and that is why I feel [my art] is important,'” Réna told Mornings with Moni.

In high school, one of her teachers encouraged her to paint for the first time. As a child raised in Long Island, New York, Réna always dabbled in drawing and creating things, but never truly saw herself as an artist until she received that extra push.

“From there, I poured all of my sense of self into my work and decided to continue the journey into college,” said the 21-year-old Arts and African American/African Studies minor at Dartmouth College.

To make sense of her Bajan heritage and help other WOC embrace their identities, Réna turned to historic portrait art. She focused on creating miniature portraits that would educate others about Black history while dispelling stereotypes about certain idyllic tourist destinations.

Réna–who has aspirations of becoming an art therapist–describes her style as a blend of surrealism, realism, and abstract art. She explores historic themes of colonialism, slavery, freedom, while spotlighting powerful and confident women of color. She also uses her art as a way to document and stay connected to her family’s Barbados roots.

“Some of my influences are Frida Kahlo and aboriginal original paintings. I also derive a lot of my recent work from Black history and my concepts of my Bajan heritage.”

Many of her pieces are “minnies” or miniature canvas portraits using acrylic paint, which require an immense amount of patience and attention to detail, like this recreation of a rum shop in Barbados.

When Réna first started her art journey in college, she found that pursuing the arts wasn’t a walk in the park. The technical aspects of her major along with endless school work completely consumed her time. She began to realize that she had little to no time left to work on honing her craft, and was afraid she would start to lose her identity as a Black artist.

“Along the way, I put the paintbrush down and had honestly thought that I would not take my art seriously anymore.”

But despite the setbacks, Réna found a way to carve out time for her true passions and leave the doubts behind.

Today, she is currently working on a new portrait art series called “Women of Confidence – WOC,” which aims to bring out the “beauty, sexiness, and confidence that women of color behold.” To connect on a deeper level with her subjects, Réna has taken the time to interview each of the volunteers so she can design a unique background that accurately depicts their personality and stories.

Réna prefers to work within a series rather than solo projects, because she says that multiple paintings often challenge her to think outside the box and carve a new empowering narrative. Series portraits often force her to figure out a creative way to tie them to an overarching theme while presenting the viewer with more than one interpretation. She intends to primarily focus on painting people of color and “portraying blackness through different lenses.” Most of her paintings tie into what it means to be Black within the Black Diaspora, she explained.

“One thing that I intend to unify all six of the portraits with is the color blue because blue is a calming color that represents trust, loyalty, wisdom, confidence, intelligence, faith and truth.”

Some of Réna’s personal favorite pieces include her “Juneteenth Painting Series,” “The Blue Mini Galaxy,” and her “Barbados in Black and White” Series — all of which shed light on important historic events and places that are often overlooked or viewed in a stereotypical way.

“I created the Juneteenth pieces because this Juneteenth has become historic due to current events in the U.S. today with the Black Lives Matter Movement.” These paintings have also become a raw glimpse into what she sees in her world, she added.

For her Juneteenth painting series, Réna used the colors red, black, white, and yellow as a way to form abstract shapes and forms from her imagination.

“Black history is an overflow of creativity and culture. Blackness is unfiltered beauty and expression. Being a Black woman artist has come with its own set of trials and tribulations but when I think about freedom, I think about being able to create works like these.”

For her senior thesis project, Réna created the “Black and White Barbados” series as an ode to her island and its history, but also an opportunity to educate others on the erasure of important Black stories.

“Barbados was the first Caribbean Island to be colonized by colonial powers and its chattel slavery past is deeply tied to the countries culture today. The island has become a tourist hotspot and is commonly depicted as a colorful, vibrant, Caribbean getaway for predominantly white tourists on vacation. The fantasy-like overly colorful depiction erases the dark history that still influences the people of Barbados and that is what I wanted to capture in these paintings.”

Réna says she intentionally made these paintings black and white to strip the images of their color and provide a more disturbing and realistic visual of the Caribbean island that is often left out of narratives.

Her “Blue Mini Galaxy” painting (below) was inspired while she was working on her Barbados series because she wanted a break from realism.

“It was completely unplanned and is a direct tie to my imagination. You can’t really explain what’s going on in the painting and that is what I love about it.”

In the next few years, Réna would like to reconnect with her roots by eventually moving to Barbados and becoming a full-time artist. “I’m working hard to attain this dream and am hoping to see it through.”

In the meantime, Réna is wrapping up her undergraduate studies and is excited to focus full-time on her business, RéCreates LLC, where she will continue to share her art with the world. When she’s not busy with her art, she enjoys playing Sudoku and jigsaw puzzles to challenge her mind. She also enjoys watching documentaries about inequality, injustice, and Black culture, to inform and inspire her art.

Her advice to aspiring POC artists is to make sure their stories–and the stories of subjects they tell–are seen and heard through art.

“All of us have unique stories that don’t fit the molds and boxes that society has attributed to us and that is why aspiring artists and creatives should continue to create. Make plans and write everything down. Believe in yourself more than anyone could believe in you.”

-Written by Monica Luhar for morningswithmoni.com

*This blog post/feature was originally published on July 12, 2020 on morningswithmoni.com. It is not available for republishing unless you receive written consent from the author. Please email me at monicaluhar@gmail.com for permission to republish with credit. Thanks.